Our colleague and student of the doctoral program in Chemistry, Zdeněk Kratochvíl, is currently on an internship abroad until Christmas, specifically at the Faculty of Science of the University of Salzburg in Austria. This several-month foreign cooperation was finally fulfilled, despite the initial complications, and Zdeněk and his colleagues from the Austrian university can fully devote themselves to testing nanoparticles carrying RNA acid. At the same time, Zdeněk managed to successfully defend his scientific work at the MendelNet student conference, which is organized annually by the Faculty of AgriSciences MENDELU. You can read how the conference went and what are the results of his research so far in this interview. 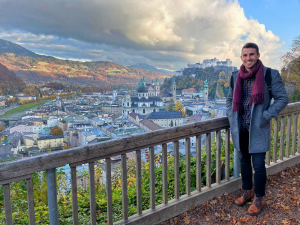 How does such cooperation arise? Why are you actually in Salzburg?

In my case, it was more of a minor interplay of lucky coincidences. My dream has been to see Salzburg for several years, or to work there for some time. And last year, one of my leaders, prof. Andrew David Miller, has repeatedly mentioned his friend and that she can offer us a world-class experience in advanced methodologies and technologies that could be key to our research. Subsequently, I found that her professional background significantly overlapped with the topic of my Ph.D. studies, so I took advantage of the situation, took the initiative, contacted professor Meisner-Kober and after her consent I applied for a scholarship to the Austrian agency OeAD within the program Aktion Austria – Czech republic. A few setbacks came then, but in the end it worked out.

Has covid somehow complicated your internship?

Yes, I was supposed to go to Salzburg in March this year and be there by June. Unfortunately, for hygienic reasons, they had limited capacity at the university, so we preferred to move my trip in the fall. But now it is starting again, probably as a result of which chemical orders are being delayed. From Monday 22.11. in addition, a nationwide lockdown applies in the local federal state. When I think about it, I am very surprised by the fact that, we have practically not moved anywhere in this regard since March 2020, and the predictions of the relevant structures were completely different. Now I can only hope and believe that I will be able to complete here what I have planned for this internship.

So for what purpose did you go on the internship, what is your goal?

The aim is to master the methodology in which professor Meisner-Kober boldly ranks among the world’s best. It is about methods of characterization of nanocarriers at the level of individual particles or even molecules by fluorescence microscopy. In addition, we plan to focus on tracking nanoparticles in target cells, in other words, we want to observe what is actually happening to our nanoparticles after entering the cells, what cellular structures they interact with, etc. 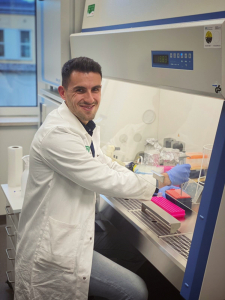 Could you tell us about your overall research?

Our research project is dedicated to the preparation, characterization and functional testing of liposomal nanoparticles bearing therapeutic ribonucleic acid (RNA). By the way, they are nanoparticles based on almost the same principle as those in coronavirus mRNA vaccines, with the difference that ours are to be injected intravenously into the bloodstream to treat hepatitis B. nanoparticles cause the so-called silencing of the viral gene, thanks to which the virus eventually penetrates the cells. Another added value of our nanoparticles compared to those in vaccines is their pH-sensitive structure, which allows RNA release from nanoparticles only at the desired location near the nucleus-enveloping cell structures where genetic information is translated to protein and where the therapeutic RNA blocks this process. We would like to complete this project within the next year. And since nanoparticles of this type can be customized according to the application, it is very likely that we will then focus on the research of mRNA vaccines.

Have you come up with any results yet?

So far, we have a relatively complex characterization of our nanoparticles and preliminary results of functional experiments, which suggest that our nanoparticles work very well. However, we do not want to rejoice because we achieve several fragmentary results. Science is an analytical work where the individual results need to be viewed very critically, but it is necessary to verify them with several other methods. And these partial results must then have a certain connection, they must complement each other to form a kind of aggregate, which should be the main output of the research. It’s like putting together a puzzle, where the individual pieces don’t tell you much, but the more they manage to incorporate into the overall picture, the easier one can see its essence. So I’ll rejoice when we have the final picture.

Why do you think it is good for students / colleagues to do internships abroad? Is this your first internship?

Yes, this is my very first internship and it may not be the last. In my opinion, it is good to do internships where one can gain such experience and acquire such knowledge and skills that his home institution cannot provide, because it has a slightly different focus. And if the given workplaces have something to offer each other, this can lead to a very nice cooperation for many years to come.

How did you manage to combine the internship with the preparation for the MendelNet conference?

In fact, I initially approached that conference without any expectations. So I didn’t even think about placement, I just wanted to “present” my own and have it behind me as soon as possible so that I could do my job here in Salzburg. Unfortunately, I had some technical complications in the lab, so I decided to spend a few days preparing the presentation, and in the end it paid off.

What was it like to present online and what was your presentation about?

I must say that I had no problem presenting online, because I already had experience with it before, for example, last year the final round of the Brno Ph.D. Talent competition also took place online. In the presentation on MendelNet, I described the concept of our project and the process of preparation of nanoparticles, I also presented some partial results and in the end I outlined the following steps to complete the project.

What does winning MendelNet actually mean, will you have any advantages now?

It mainly meant praise from my leaders. Personally, I see the win as a motivation for the future, and I see the commission’s evaluation as an expression of the fact that what I am doing makes sense. 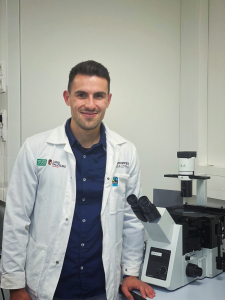 What would you like to do in the future, what is your scientific goal?

You know, the goals I would like to achieve in the future are so much that I would probably have to clone myself somehow. But for the first time here, I have to admit publicly that I honestly can’t imagine spending some time in the laboratory or perhaps most of my professional life there. Circumstances have taught me to set more general, and therefore more credible goals for me, which will eventually take on a more concrete form. One of them is, for example, to make science accessible to the general public. In this century, society has reached a point where new facts and knowledge need not only be presented to people, but mainly explained in a popularized way. At the same time, I would like to push for a rational discussion and respect for the work of others to return to science. In my opinion, nowadays the mainstream scientific has taken on the role of a kind of censor, deliberately labeling and discrediting scientific knowledge that does not fit into this current. This can best be seen in the context of what is happening around the covid, where a large number of experts describe opinions other than theirs as misinformation and delusions, instead of refuting them with consistent facts or experiments. At the same time, on the other hand, their opinions, which are often insanely promoted, often lack any rationality and do not completely correspond to the obvious facts. I would like to distance myself strongly from these experts, and especially from their approaches to the scientific debate, because I do not think that they do a good name for science among people. And, as I said, science needs to be made available to the wider society, explained current scientific knowledge, and put it in context with others. And without proper discussion, people will not understand the issue, or at least its basics. For this reason, I am really grateful that there is more than enough space for scientific discussion at our Department.